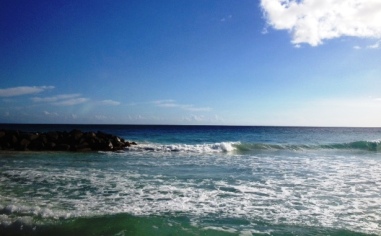 Today I was alone at the ocean.  I’ve always enjoyed being in the water, but my experience today changed me.

The surf was so high that the red “do not swim” flags were out (but no one enforces these things.)  As the waves pounded toward shore, I eagerly walked toward them.  By the time I was in water to my waist, the incoming waves were over my head.  If I tried to stand against them, they knocked me backwards.  But as each wave approached, just before impact, I dove into the base of the wave, and the foaming water passed harmlessly over me.  I came out on the other side laughing.

I did this for quite a while, wading deeper, facing higher waves, until I could no longer touch the bottom.  Then I swam beyond where the waves were breaking.  In the deeper water they were just high swells, constantly moving.  I floated on top and gazed at the puffy white clouds dotting the deep blue sky.  There was so much power in the water, but there was no reason to fight it or fear it.  It was the perfect place to rest and relax.

I was reminded of the passage where the apostle Paul prays that we might “comprehend the breadth and length and height and depth” of Christ’s love.  I was barely a speck in the water in the tiny bay where I floated on the edge of a vast ocean, and could not begin to imagine how much water surrounded me.  But that’s how God’s love is.  There is so much power in it, but I can rest in it as easily as I floated on those waves.  Nothing I face is too hard for God.  Nothing I need is beyond His capacity to provide.  When life’s circumstances come at me and threaten to knock me down, I can dive into God’s love and come up laughing on the other side.

Paul concludes his prayer, “know the love of Christ, which passes knowledge, that you might be filled with all the fullness of God.”  To that I say, Amen!